“It is with the highest honor I recommend Daniels and Daniels. Their help in our building project has been nothing short of outstanding. I will always use them for any building project that my church ever undertakes. Let me tell you why. I read an article about two years ago from a particular denomination that stated 52 percent of pastors either quit, take the job of pastor at another church or die in the middle of a building project. It also went on to communicate the toil it can put not only on the pastor but on the church as well. I must admit I was not shocked when I read the article.

My father went home to be with the Lord at age 46. He had worked in ministry for over 20 years and built up the congregation to over 1,000 members. He then sought to build a new facility to help with the new growth. He set out as most pastors do. He hired an architect and told him he wanted to build a $10,000,000 building. When my father said that he meant a $10,000,000 budget. Meaning land, dirt work, fees, and all building expenses. So we bought property for $1,500,000. Then the architect went to draw up the plans. When this happened he asked my father a loaded question. What do you want in a building? My father answered the question. He wanted a lot and he had no idea about how much it would cost he was just answering the question. Then they asked the children’s pastor and the youth pastor what they wanted in a building. Once again they answered not knowing how much anything would cost. Well the architect went to work designing what they wanted. Then after we paid over $700,000.00 in architect fees we bid out the project to several construction firms. The cheapest bid came back at $17,000,000. Most bids were anywhere between $20,000,000 and $23,000,000. We designed a building that we couldn’t afford to build.

You can imagine the stress that put on all who were involved. Everybody was discouraged. The banks wouldn’t loan us near the money that was needed. The congregation was tired of all the fund raising. To put it in one word it was simply hard on everybody. So my father then went to do a redraw to get the price down and the architect charges more money. To make a long story a little shorter, my father passed away in the middle of all of this. That was a little under 10 years ago. I am now the senior pastor at Word of Life. The congregation is stronger then ever and we are building that building. I was determined not to let the same mistakes happen all over again in regards to building a building. So I set out to get counsel from pastors who had built before. Without fail I never talked to a pastor who actually enjoyed the process. I was determined to find a better way. 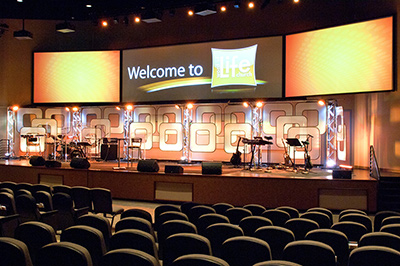 That is when I stumbled upon Daniels and Daniels. When I interviewed them I was shocked at the difference between them and the other building firms. I felt as if I could trust them to do what is in the best interest of the church. They actually told me they thought I should build a little smaller! That was shocking to me  because every other firm wanted me to build as big as possible because their commission would be higher.

Everyone I met at their office seemed to have character and honesty. Not to mention the skills needed to walk me through this building process. After much prayer I a made the decision to use them. I could not be more thrilled by that decision! It has literally been one of the best decisions I have made in my years here as pastor. I have never enjoyed pastoring more than I do right now. We are building a gorgeous 45,000 square foot building that is on time and under budget. We designed the building to be built in phases with 45,000 square feet in phase one and another 45,000 in phase two. We will go into phase one with only $1,500,000 or so in debt. Making for an easy transition into phase two. I could not have done it with out Daniels and Daniels. If you or anyone else you know is building a building the first call to make is the one to Daniels construction.

They saved me a tremendous amount of time, money and frustration. I will give you an example. I worked with Daniels and Daniels to find the right architect to help us build. One day I talked to the architect and we decided to increase the seating in the auditorium. The architect then added over 8,000 square feet to the plans. I didn’t catch it. I never would have known that it would have put us over budget until I started bidding out the building. But Daniels and Daniels saw it, caught it, and fixed it. That move alone saved me hundreds of thousands of dollars. I cannot imagine a more perfect builder for a pastor and church. They simply must help you with your building. I think if you decide to use them you will be able to say like me “choosing Daniels and Daniels was one of the best decisions that I ever made.”