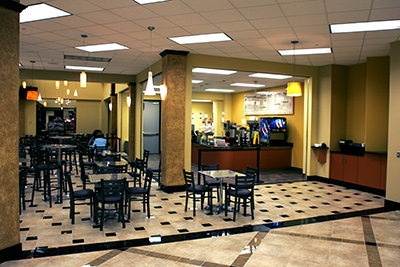 If you’re visiting a new church for the first time in a while, you might think you just walked into a Starbucks. Many Churches that we have built have done this as a way to promote community within the church, and to create a place to foster fellowship.

We have re-posted the article below:

If you’re visiting a new church for the first time in a while, you might think you just walked into a Starbucks.

The trend to put coffee shops and similar gathering areas in church lobbies started nearly a decade ago, but has exploded in recent years, said Brad Lechtenberger, a Tulsa architect who has designed dozens of churches across the country, including several prominent churches in Tulsa.

“It’s really gaining steam. Every church we talk to wants a coffee shop,” he said.

“They’re trying to become more of a destination, not just on Wednesday nights and Sundays, but throughout the week,” he said. “People are coming from the community into the church, through the coffee shop.”

“We’ve done coffee shops that are almost identical to Starbucks,” he said.

“I think Victory (Christian Center) probably did it as well as anyone. You walk in there, and it almost feels like you’re in the mall,” Daniels said.

Adjacent to the coffee shops, some churches also are putting in children’s play areas, he said.

“Our primary focus was to promote community within the church, to create a place where we could foster fellowship, connection, in a safe setting and a godly atmosphere, instead of having people go down the street,” said associate pastor Bruce Edwards.

The cafe is located at the front of the church off of an expansive lobby area. It sells sandwiches, snack items, coffee and smoothies, but no cooked food.

It is open Saturdays and Sundays before, during and after church services, and also weekdays from breakfast through mid-afternoon.

Paid workers staff the cafe, which does not make a profit.

“That was not our goal,” Edwards said.

Visitors to the church can browse in the nearby book store and meet friends for coffee.

First Baptist Church in downtown Tulsa put in a coffee shop when it renovated its old building about two years ago.

“We built it to get people into the church, and to provide a nice meeting place for our people to visit,” said Bobby Hart, operations manager.

The shop has an exterior door at Fourth Street and Cincinnati Avenue, and also interior access to the church.

It is open to the public Sunday and Wednesday evenings, and used for church gatherings during the week.

A private vendor originally ran the coffee shop, but it is now run by church volunteers, Hart said.

“We wanted a place where people could mingle and talk and feel relaxed enough to make friends,” said the Rev. Chris Buskirk, pastor.

“We wanted to be as welcoming as any Starbucks.”

The church serves a free, hot breakfast at 10 a.m. every Sunday in the cafe. Churchgoers then go into the 10:30 a.m. service.

“We wanted to give our people something they could easily invite people to,” Buskirk said.

“We wanted to offer radical hospitality, something that surprised people.”

Buskirk said the breakfast has been highly successful.

The cafe is also used for an informal discussion period 9-10 a.m. Sundays, as people gather around tables.

Young people, in their 20s and 30s, increasingly do not want to be “talked at” but want to discuss spiritual things and life issues, he said.

The cafe is open Sundays only.

Church furniture consultant Joshua Gabrielson, owner of ChurchMart in Virginia, said he is seeing more churches use a coffee shop-style setting, some of them even allowing worshipers to bring drinks and food into the service.

“The idea is that church is not just a place of worship but it’s a home, your home. Everyone wants a church facility to be warm and inviting,” he said.