“A Word of Life Story” 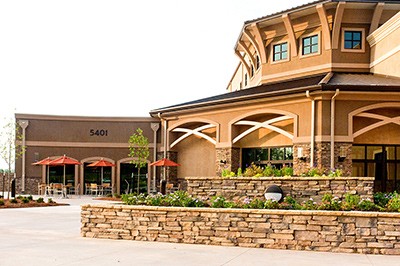 Churches by Daniels is proud to announce the completion of Phase 1 for Word of Life Church in Flowood, MS. The grand opening was held on April 17th in the new 900 seat, state-of-the-art sanctuary. On the first Sunday in the new facility over 2,400 attended with over 450 first-time visitors. Three months after their grand opening, they are already having 3 services to accommodate the attendance.

Looking at this beautiful facility one would think that the journey to get there was an easy one, but not for Pastor Joel Sims. Joel’s father, Ronnie Sims, was the Senior Pastor of Word of Life Church and at the age of 17 Joel’s father went home to be with the Lord. At the time of his father’s passing, Joel was a senior in high school. Their family was devastated by the loss and Joel’s mother took over the church for the time being.

Now only 27 years old, under Pastor Joel’s administration the church has experienced enormous growth! For the grand opening he preached a message on Beauty for Ashes and how that is what God has done over the past 10 years. On the day that seemed to be the worst day of his life, 10 years later God was able to bless them with such an amazing gift in this new building.

Pastor Sims has an innate ability to teach about vision, setting goals, and doing the impossible. At the time of his father passing, Pastor Ronnie Sims was planning the new building project. Pastor Ronnie Sims had purchased the land where the new building now sits which is adjacent to main thoroughfare in the town of Flowood. That vision was implanted into the heart of his son. Ten years to the date after Pastor Ronnie’s death, his son, daughter, and wife led a congregation into the new building that will forever be “Carrying on a tradition and Breaking new ground.”

If you’re interested in building a church for your congregation, contact us today for a free consultation!