When it comes to great architectural and interior design, it doesn’t get much better than historical church buildings. People travel around the country to experience the designs inside and outside of many of these churches. These places of worship provide great inspiration for architects everywhere, particularly those in the church construction business. If you’re looking for inspiration on the construction and design of your church, here’s a list of some of the most incredible church buildings in America. 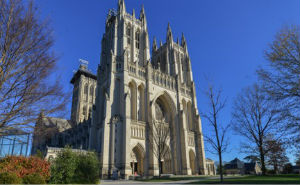 Washington, D.C. is full of churches, but the National Cathedral is arguably the most incredible. It has hosted 21 presidential funerals as well as national heroes like Helen Keller. This building – with a Neo-Gothic style, limestone exterior, and steep arches – took 83 years to build. It has the structure of an ancient church, complete with porticos and stained glass windows; but also has some contemporary touches, like the statue of Darth Vader in one turret to symbolize modern-day evils. 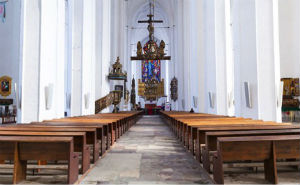 This church dates back to 1899 when construction first began. It was officially completed in 1920, after several delays during World War I. Though it was condemned in 1989, the church’s supporters were able to rescue the building and preserve its history, including the 26 nine-foot angel statues that line the roof and the original stained-glass windows depicting biblical scenes. 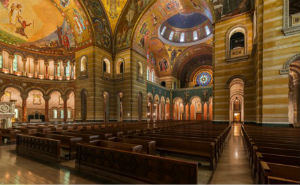 In the early 1900s, the Archbishops of St. Louis rallied together to raise $1 million in order to construct this cathedral reminiscent of the Byzantine and Roman empires. After it was built, St. Louis was named the city’s patron saint. It’s an incredible structure with towers and classic design, golden arches inside, painted ceilings, and stained-glass windows.

This church, built in 1907, is a major part of St. Paul’s skyline view. It was designed in the Beaux Arts architectural style and is considered the sister church of the Basilica of Saint Paul Outside the Walls in Rome. The walls show a number of bronze grills that depict Paul’s conversion story and his good works. Thanks to its resemblance to its Roman sister, tens of thousands of people flock to this church on their sacred pilgrimages.

Construction began in 1975, but this church has a modern twist. It’s composed of 12 glass and concrete tubular columns that surround a central dome. Each column represents one of the 12 apostles of Jesus Christ. The central dome has a larger cross on top and it represents Jesus Christ.

This one-story chapel rises 48 feet into the air. It’s composed of 425 windows that cover 6,000 square feet. The building is located in the middle of a forest-like environment, surrounded by the same trees that helped build its structure. It has won several prizes for its architectural design and has been visited by millions of people since its completion in 1980.

This place of worship is built to look like an aircraft with 17 spires on either side of the building that come together at a point. It stands 150 feet high and can be seen from several miles away. As a functioning church on the Air Force Academy base, this structure is designed to house several worship services, including Catholic, Buddhist, Islamic, and Jewish. It has received several awards and was named a National Historic Landmark in 2004.

The architecture of this building is unique to say the least. Instead of towering spires, domes, and stained-glass windows, it has more of an Egyptian feel, including the surrounding palm trees included in the landscaping.

Tourists travel for miles to see the breathtaking Grand Canyon and the natural rock formations at Sedona. The Chapel of the Holy Cross, nicknamed the Chapel in the Rock, is literally built into a rock formation. It’s a Roman Catholic church inspired by the structure of the Empire State Building, and it gives the feeling of utter serenity on both the inside and outside. It received the Award of Honor from the American Institute of Architects in 1957 for its unique structure.

The Wireman Chapel looks a little more like a NASA gadget than a church. Its most defining features include the octagonal shape accented by eight modern girders that resemble the flying buttresses of medieval times, but with a twist. On the inside, the church is known for its in-the-round seating, direct sunlight into the center of the sanctuary, and lower glass panels that reflect the nearby lake. It’s a unique structure with plenty of character and modern-day style.

Not to be confused with the Chapel in the Rock in Arizona, the Chapel on the Rock, officially named Saint Catherine of Siena Chapel, literally sits atop a rock in the pristine setting of the beautiful Colorado mountains. It also takes on a more traditional shape with stone masonry on the outside and a few, small turrets.

It was inspired by Biblical text in the book of Matthew when Jesus told Peter, “Upon this rock, I will build my Church.” This statement was taken literally, and this is now one of the prettiest little churches out there. Pope John Paul II even visited the little basilica during a trip to Denver, giving it his personal blessing.

Located on Nob Hill, Grace Cathedral is reminiscent of the Notre Dame Cathedral in Paris. Not only does this cathedral feature stained-glass windows depicting biblical scenes, but it also has an indoor and outdoor labyrinth. This provides parishioners a chance to meditate on their troubles and seek the healing power of Jesus Christ as they work their way through the maze. It was completed in 1964, and since that time, has hosted several speakers and religious leaders, including Dr. Martin Luther King, Jr., Carlos Santana, the Dalai Lama, Archbishop Desmond Tutu, Jane Goodall, and Sandra Day O’Connor.

Have Your Dream Church in Mind? Churches By Daniels Can Help!

Now that you’ve explored some of the architecture, design, and history involved with some of the most beautiful churches in North America, you probably have some ideas about how you’d like your own church to look. Churches by Daniels is a leader in church construction, and we’re excited to help you achieve your ministry and architectural goals. We recognize your vision for your church building, and our design process is equipped to meet your specific needs. For more information about the services we provide, contact us today!